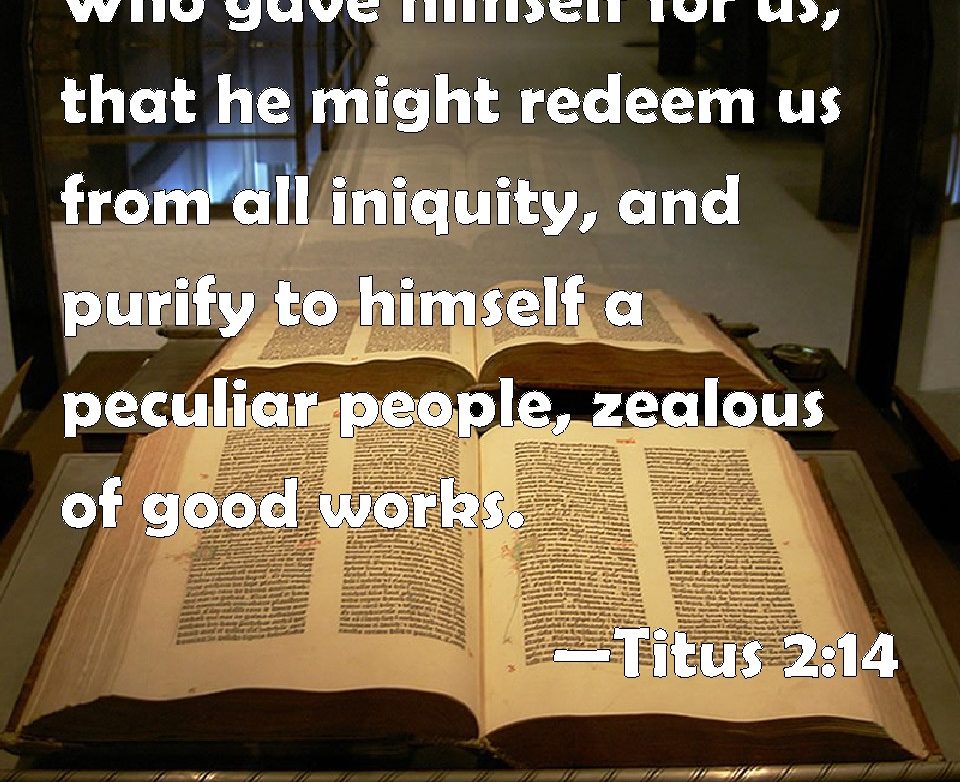 We are the peculiar people of God; all His own, closest to His affections, under His protection, the recipients of all needed.

We use the word “peculiar” sometimes when we speak of something odd or strange. But that is not its use in Titus 2:14. The word is translated from a Greek word which is made upon two words, one which means “around” as a circle, and the other one which means “to be”.

It can be charted by a dot within a circle. As the circle is around to dot, so God is around each one of His saints. The circle monopolized the dot, has the dot all to itself. So God has His own all to Himself. They are His own private unique possession. He has reserved them for Himself.

Titus 2:11-14
11 For the grace of God has appeared that offers salvation to all people. 12 It teaches us to say “No” to ungodliness and worldly passions, and to live self-controlled, upright and godly lives in this present age, 13 while we wait for the blessed hope—the appearing of the glory of our great God and Savior, Jesus Christ, 14 who gave himself for us to redeem us from all wickedness and to purify for himself a people that are his very own, eager to do what is good.

1 Peter 2:7
7 Now to you who believe, this stone is precious. But to those who do not believe,

“The stone the builders rejected
has become the cornerstone,”

This place of favor is also a place of protection. Put a dot outside the circle. That represents something outside the sphere that would love to harm us. But the dot on the outside cannot get to us without crossing the line of God’s circle around us. He will not permit the devil to confront us with a trial or test that is too great for us! And with every temptation He will give us strength and wisdom to overcome it.

1 Corinthians 10:13
13 No temptation has overtaken you except what is common to mankind. And God is faithful; he will not let you be tempted  beyond what you can bear. But when you are tempted, he will also provide a way out so that you can endure it.

We are the peculiar people of God; all His own, closest to His affections, under His protecting, the recipients of all needed.

He sends and permits. The grace of God is sufficient.

Romans 13:1-8
Let everyone be subject to the governing authorities, for there is no authority except that which God has established. The authorities that exist have been established by God.2 Consequently, whoever rebels against the authority is rebelling against what God has instituted, and those who do so will bring judgment on themselves. 3 For rulers hold no terror for those who do right, but for those who do wrong. Do you want to be free from fear of the one in authority? Then do what is right and you will be commended. 4 For the one in authority is God’s servant for your good. But if you do wrong, be afraid, for rulers do not bear the sword for no reason. They are God’s servants, agents of wrath to bring punishment on the wrongdoer. 5 Therefore, it is necessary to submit to the authorities, not only because of possible punishment but also as a matter of conscience. 6This is also why you pay taxes, for the authorities are God’s servants, who give their full time to governing. 7 Give to everyone what you owe them: If you owe taxes, pay taxes; if revenue, then revenue; if respect, then respect; if honor, then honor.8 Let no debt remain outstanding, except the continuing debt to love one another, for whoever loves others has fulfilled the law.

Psalms 11:3
When the foundations are being destroyed,
what can the righteous do?”

Hebrews 12:26-28
26 At that time his voice shook the earth, but now he has promised, “Once more I will shake not only the earth but also the heavens.”27 The words “once more” indicate the removing of what can be shaken—that is, created things—so that what cannot be shaken may remain.
28 Therefore, since we are receiving a kingdom that cannot be shaken, let us be thankful, and so worship God acceptably with reverence and awe,

I sought the Lord, and he heard me, and delivered me from all my fears.
Psalm 34:4