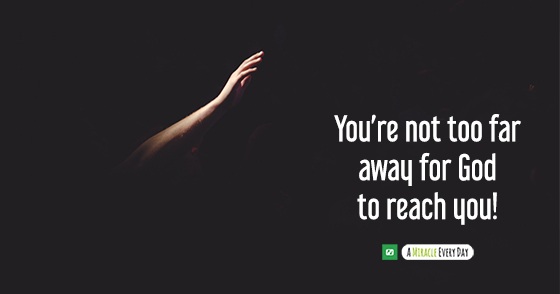 You may be following the Lord from afar off. You may have grown cold in your relationship with Him. You may have ceased with praying and reading His Word, and attending His house of worship to give Him praise. But I want you to know something, and I have a word from the Lord for you: You may be afar from Him, but HE is not far from you!

2 Peter 1:3-10
3. According as his divine power hath given unto us all things that pertain unto life and godliness, through the knowledge of him that hath called us to glory and virtue:
4. Whereby are given unto us exceeding great and precious promises: that by these ye might be partakers of the divine nature, having escaped the corruption that is in the world through lust.
5. And beside this, giving all diligence, add to your faith virtue; and to virtue knowledge;
6. And to knowledge temperance; and to temperance patience; and to patience godlinesss;
7. And to godliness brotherly kindness; and to brotherly kindness charity.
8. For if these things be in you, and abound, they make you that ye shall neither be barren nor unfruitful in the knowledge of our Lord Jesus Christ.
9. But he that lacketh these things is blind, and cannot see afar off, and hath forgotten that he was purged from his old sins.
10. Wherefore the rather, brethren, give diligence to make your calling and election sure: for if ye do these things, ye shall never fall:

Today’s message is the third and final in a series of messages about God’s intentional plan to multiply within the heart and mind of a believer generous and plentiful benefits of grace (charis) and peace that pertain to life (zoe) and godliness (eusebeia).

Zoe Life that embraces the confession of the One True and Living God, and conduct and conversation corresponding to this knowledge. Eusebeia = Godliness. Eu = well. Sebomai = worship. So the word would mean “Worship rightly directed.” knowledge= epignosis rather than gnosis, implies a more perfect and intimate, personal than a mere barren gnosis.

We are then told by the Apostle that by glory and virtue are given to us exceeding great and precious promises. Of such are:
1. Forgiveness to the penitent sinner.
2. Rest for the weary.
3. Comfort to the sorrowful.
4. Hope to the dying.
5. The imminent return of The LORD.
6. Raised to Life through resurrection.
7. Presence in times of adversity.
8. Answer to our prayers.

These promises enable believers to communicate within the sphere of the divine nature.

This divine nature implanted in the inner being of a believing sinner becomes the source of his new life and actions. By its energy in giving him both the desire and the power to do God’s will, he has escaped the corruption that is in the world.

These definitions of life in the faith are a blessed benefit to the church and the world. These marvelous evidences are supplied by the saints of God. This activity of adding to faith and virtue is nothing more than the believer exercising faith in the Lord to supply his needs, to guide him along life’s way. These virtues are generated in the heart of a believer by the Holy Spirit.

In verse 8, we are told that if these virtues be in us and abound that we will never be barren and never be unfruitful.

Abound = pleonazo One possessing in the sense of “super abounding”.

A Christian is never filled with the Spirit until he has an outflow of the good things of God.

Make:katistemi to constitute, , to render, to cause.

Barren = argos To work, from ergon, and a means “not” so the word means “no work. ” Idleness.

Correct rendering of the verse:
8 For if these things are your natural and rightful possession, and are in superabundance, they so constitute you that you are not idle nor unfruitful in the fulI knowledge of our Lord Jesus Christ.

Now what we have described is the way God planned for us to live after conversion. But the fact is, we sometimes find ourselves nowhere near that description

Listen to our text:

9. But he that lacketh these things is blind, and cannot see afar off, and hath forgotten that he was purged from his old sins.

Lacketh = TápEIuI (pareimi) — I am present, am .
“He that lacketh these things” could only be that believer who is barren and unfruitful in the previous verse. Unaided by the Spirit and ineligible by reason of “idleness.” This condition is called lukewarm, asleep in Zion”, “slothful”, “weak”, “a hearer but not a doer,” or as the writer of this epistle did, “following God from afar off.” What once was a possession is now as merely a present with him.

His condition is described as blind, but a certain kind of blindness. He is not blind in the sense that he cannot see physically. He is spiritually blind, and “cannot see afar off”, the word is muopazo, and it was used in classical greek to describe a near-sighted man. Robertson says, “he messes up his eyes because of the light.” This term speaks of a person who is short-sighted spiritually, seeing only things present and not heavenly things. (Vincent) Mayor translates, “He cannot see the things of heaven, though he may be quick enough in regard to worldly matters.”

The things of heaven are hidden to him because his eyes are more focused upon the near and dear than the things of God’s grace in the there and then! He is messing with his eyes, unwilling to peer into the spiritual, and more excellent thing God would love to give him.

He “hath forgotten”. This is the case of a saint who has wandered far from the sanctifying work of the Holy Spirit. He is carrying around with him his justification, but not availing himself of his sanctification. He is not stone blind. He has some spiritual sight.

But the light of the Word of God dazzles his sick soul as he turns his dimmed spiritual eyes away, a sad situation indeed. He has lost the joy of his salvation, and lost the peace of a spiritual soul. Wayward and wandering, like a sheep without a shepherd.

Matthew 7:11
If ye then, being evil, know how to give good gifts unto your children, how much more shall your Father which is in heaven give good things to them that ask him?

Hebrews 2:3-4
3 How shall we escape, if we neglect so great salvation; which at the first began to be spoken by the Lord, and was confirmed unto us by them that heard [him];
4 God also bearing [them] witness, both with signs and wonders, and with divers miracles, and gifts of the Holy Ghost, according to his own will?

1 Cor. 2:9-16
9. But as it is written, Eye hath not seen, nor ear heard, neither have entered into the heart of man, the things which God hath prepared for them that love him.
10 But God hath revealed them unto us by his Spirit: for the Spirit searcheth all things, yea, the deep things of God.
11 For what man knoweth the things of a man, save the spirit of man which is in him? even so the things of God knoweth no man, but the Spirit of God.
12 Now we have received, not the spirit of the world, but the spirit which is of God; that we might know the things that are freely given to us of God.
13 Which things also we speak, not in the words which man’s wisdom teacheth, but which the Holy Ghost teacheth; comparing spiritual things with spiritual
14 But the natural man receiveth not the things of the Spirit of God: for they are foolishness unto him: neither can he know them, because they are spiritually discerned.
15 But he that is spiritual judgeth all things, yet he himself is judged of no man
16 For who hath known the mind of the Lord, that he may instruct him? But we have the mind of Christ.

Follow me now to an ancient city called Athens, where that first century church planter and gospel preaching missionary stood atop a meeting place called Mars Hill. He preached unto them Christ and the resurrection, causing them to wonder what his sayings meant. He boldły declared unto them the identity of their unknown god, and then gave them some startling information.

Acts 17:24-27
24. God that made the world and all things therein, seeing that he is Lord of heaven and earth, dwelleth not in temples made with hands;
25. Neither is worshipped with men’s hands, as though he needed anything, seeing he giveth to all life, and breath, and all things;
26. And hath made of one blood all nations of men for to dwell on all the face of the earth, and hath determined the times before appointed, and the bounds of their habitation;
27. That they should seek the Lord, if haply they might feel after him, and find him, though he be not far from every one of us

You may be following the Lord from afar off. You may have grown cold in your relationship with Him. You may have ceased with praying and reading His Word, and attending His house of worship to give Him praise. But I want you to know something, and I have a word from the Lord for you: You may be afar from Him, but HE is not far from you!