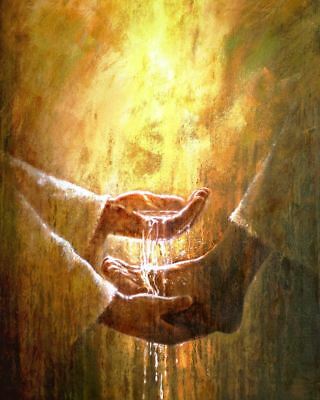 Washed by the Anointed

Jesus has established a new and living way for us to approach the throne of grace. Jesus, sinless, was anointed. We, sinful, have been washed.

He loved His disciples not only unto the cross, but “unto the end”. His return to the Father would neither terminate nor diminish the activities of His love for His own; in Heaven He is still occupied with the interest of His people.

The event which opens this passage, known as “The Paschal Discourse”, is the Lord washing the feet of His disciples.

The central design of the Paschal Discourse was to lead His own into a spiritual understanding of their new place before the Father, and their new position in the world, as distinguished from the portion and place which they had in Judaism.

1. Now before the feast of the passover, when Jesus knew that his hour was come that he should depart out of this world unto the Father, having loved his Own which were in the world, he loved them unto the end.
2. And supper being ended, the devil having now put into the heart of Judas Iscariot, Simon’s son, to betray him;
3. Jesus knowing that the Father had given all things into his hands, and that he was come from God, and went to God;
4. He riseth from supper, and laid aside his garments; and took a towel, and girded himself.
5. After that he poureth water into a bason, and began to wash the disciples feet, and to wipe them with the towel wherewith he was girded.

The Gospel of John is divided into two sections. The first goes through chap. 12 and discloses those who “received Him not” and beginning with chap. 13 Jesus begins His instructions for those “who received Him.

John chapter 12 opened with the Lord’s feet. Chapter 13 opens with the disciples feet. The feet of the Savior are “anointed” and the feet of the disciples are “washed.” His life was unspotted, and the disciples were dirty with sin and its consequences. The walk of the Lord Jesus was undefiled and pure. The walk of the disciples through this same world was filthy and needed washing. His life was sinless and anointed, ours is defiled and must be washed. From this point on, Jesus focused on his gracious work of maintaining those who received Him, who are in right relationship with Him in two ways.

We are left here in this world, and its dirt and filth are defiling, and hindering us from entrance into the Holiest. But in this episode, we see Jesus establishing a new and living way for us to approach the throne of grace.

Note that the time had come for Him to depart out of “this world” and not “the world”. Evidently, “this world” had become a terrible place for the Savior. He used this term often near the end of His life.

Jesus said in John 9:39 “For judgment I am come into this world.”

JOHN 12:25 “He that liveth his life shall lose it. He that hateth his life in this world shall keep it unto life eternal.”

He had made the world, but sin has made this world what it is, and He was to depart. By His sacrificial death on the cross, the prince of this world, Satan would be cast out. Not only was eternal life to come out of his dying, but a glorious victory out of what seemed to be an apparent defeat. I believe that Satan’s hold on this world was destroyed at Calvry’s cross. Paul tells us in Colossians 2:15 that Christ “spoiled principalities, and powers, having made a show of them openly; triumphing over them. So, I believe that the first stage in the “casting out” of Satan occurred at the cross, the next will occur when he is cast Out of Heaven into the earth in Rev. 12:10; the next when he is cast into the bottomless pit in Rev. 20:3; and the final casting out is in Rev. 20:10 when he is “cast into” the lake of fire and brimstone in Rev. 20:10.

1 John 5:8
And there are three that bear witness in earth, the Spirit, and the water, and the blood: and these three agree in one.

Blood and Water Blood is Godward, Water is Saintward. Blood is judicial, Water is practical.

Hebrews 10:14-22
14. For by one offering he hath perfected for ever them that are sanctified.
15. Whereof the Holy Ghost also is a witness to us: for after that he had said before,
16. This is the covenant that I will make with them after those days, saith the Lord, I will put my laws into their hearts, and in their minds will I write them;
17. And their sins and iniquities will I remember no more.
18. Now where remission of these is, there is no more offering for sin.
19. Having therefore, brethren, boldness to enter into the holiest by the blood of Jesus,
20. By a new and living way, which he hath consecrated for us, through the veil, that is to say, his flesh;
21. And having an high priest over the house of God;
22. Let us draw near with a true heart in full assurance of faith, having our hearts sprinkled from an evil conscience, and our bodies washed with pure water.

Ephesians 5:25-27
25. Husbands, love your wives, even as Christ also loved the church, and gave himself for it;
26. That he might sanctify and cleanse it with the washing of water by the word,
27. That he might present it to himself a glorious church, not having spot, or wrinkle, or any such thing; but that it should be holy and without blemish.

Ephesians 2:13
13. But now in Christ Jesus ye who sometimes were far off are made nigh by the blood of Christ.
14 For he is our peace, who hath made both one, and hath broken down the middle wall of partition between us; KJV

Hebrews 9:13
13. For if the blood of bulls and of goats, and the ashes of an heifer sprinkling the unclean, sanctifieth to the purifying of the flesh:
14 How much more shall the blood of Christ, who through the eternal Spirit offered himself without spot to God, purge your conscience from dead works to serve the living God? KJV

Hebrews 10:19 Having therefore, brethren, boldness to enter into the holiest by the blood of Jesus,

1 Corinthians 6:9
9. Know ye not that the unrighteous shall not inherit the kingdom of God? Be not deceived: neither fornicators, nor idolaters, nor adulterers, nor effeminate, nor abusers of themselves with mankind,
10 Nor thieves, nor covetous, nor drunkards, nor revilers, nor extortioners, shall inherit the kingdom of God.
11 And such were some of you: but ye are washed, but ye are sanctified, but ye are justified in the name of the Lord Jesus, and by the Spirit of our God. KJV

Col 2:13
13. And you, being dead in your sins and the uncircumcision of your flesh, hath he quickened together with him, having forgiven you all trespasses;
14 Blotting out the handwriting of ordinances that was against us, which was contrary to us, and took it out of the way, nailing it to his cross;  KJV

“Saying, This is the blood of the testament which God hath enjoined unto you.”
– Hebrews 9:20

There is a strange power about the very name of blood, and the sight of it is always affecting. A kind heart cannot bear to see a sparrow bleed, and unless familiarized by use, turns away with horror at the slaughter of a beast. As to the blood of men, it is a consecrated thing: it is murder to shed it in wrath, it is a dreadful crime to squander it in war.

Is this solemnity occasioned by the fact that the blood is the life, and the pouring of it forth the token of death? We think so.

When we rise to contemplate the blood of the Son of God, our awe is yet more increased, and we shudder as we think of the guilt of sin, and the terrible penalty which the Sin-bearer endured. Blood, always precious, is priceless when it streams from Immanuel’s side. The blood of Jesus seals the covenant of grace, and makes it for ever sure.

Covenants of old were made by sacrifice, and the everlasting covenant was ratified in the same manner. Oh, the delight of being saved upon the sure foundation of divine engagements which cannot be dishonoured!

Salvation by the works of the law is a frail and broken vessel whose shipwreck is sure; but the covenant vessel fears no storms, for the blood ensures the whole. The blood of Jesus made His testament valid.

Wills are of no power unless the testators die. In this light the soldier’s spear is a blessed aid to faith, since it proved our Lord to be really dead. Doubts upon that matter there can be none, and we may boldly appropriate the legacies which He has left for His people. Happy are they, who see their title to heavenly blessings assured to them by a dying Saviour.

But has this blood no voice to us? Does it not bid us sanctify ourselves unto Him by whom we have been redeemed? Does it not call us to newness of life, and incite us to entire consecration to the Lord? O that the power of the blood might be known, and felt in us this night!

O the Blood of Jesus, it washes white as snow!

1 Peter 1:18 Forasmuch as ye know that ye were not redeemed with corruptible things, as silver and gold, from your vain conversation received by tradition from your fathers;

19 But with the precious blood of Christ, as of a lamb without blemish and without spot:

I will instruct thee and teach thee in the way which thou shalt go: I will guide thee with mine eye.
Psalm 32:8
Manage Cookie Consent
We use cookies to optimize our website and our service.
Manage options Manage services Manage vendors Read more about these purposes
View preferences
{title} {title} {title}