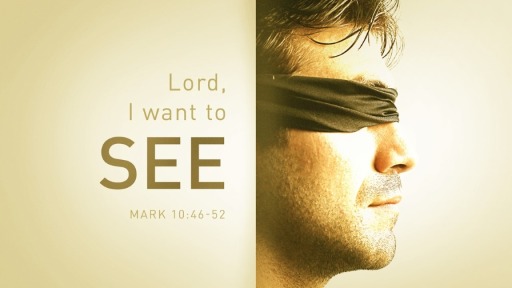 Our eyes are blinded spiritually more often than physically. Jesus opens spiritual eyes to allow us to truly serve Him and His purpose.

In Mark 10,  Jesus is in Jericho. Jericho is the lowest city on the planet and the oldest city. The Pharisees were questioning Him on law.  Jesus’s teaching was meant to open their spiritual eyes.

The Pharisees questioned Him about the Mosaic law of marriage. Jesus reminded themGod created man and woman. In marriage, they become one. He also expressed how children should be taught His ways. Children should see Christ-honoring adults in their life.

A rich young ruler ran to Jesus during this conversation and asked what he could do to inherit eternal life. This young man had kept the commandments from his youth.

Mark 10:17-22
17 And as he was setting out on his journey, a man ran up and knelt before him and asked him, “Good Teacher, what must I do to inherit eternal life?” 18 And Jesus said to him, “Why do you call me good? No one is good except God alone. 19 You know the commandments: ‘Do not murder, Do not commit adultery, Do not steal, Do not bear false witness, Do not defraud, Honor your father and mother.’” 20 And he said to him, “Teacher, all these I have kept from my youth.” 21 And Jesus, looking at him, loved him, and said to him, “You lack one thing: go, sell all that you have and give to the poor, and you will have treasure in heaven; and come, follow me.”22 Disheartened by the saying, he went away sorrowful, for he had great possessions.

The lowest will be the greatest

The disciples were confused at some His teachings that day. James and John asked Him who would be greatest among them in heaven. Jesus told them whoever was the highest should be a servant to his neighbor.

Can you drink from My cup?

Everyman needs to step on scales of evaluating your servitude to your neighbor. We should evaluate our willingness to stand with every man. Jesus is preparing them for the need for the Son of Man to immerse Himself in sacrifice for God.

Jesus and the disciples were in the Garden of  Gethsemane when Peter, James, and John could not continue to pray with Jesus through the night. The Rock crumbled and the Sons of Thunder were quiet. Jesus prayed till beads of sweat and blood appeared on His brow.

The soldiers came for Him led by Judas. Judas identified Him with a kiss. Peter tried to defend Him but Jesus commanded Him to put away his sword. These incidences Jesus used to point out they were not capable of drinking from His cup.

Response to a blind man

A blind man who was ignored and shunned and begged for his keep cried out to Jesus for His mercy. The man threw away all he had to reach Jesus and ask for his sight. Jesus granted his sight and wholeness based on his complete faith.