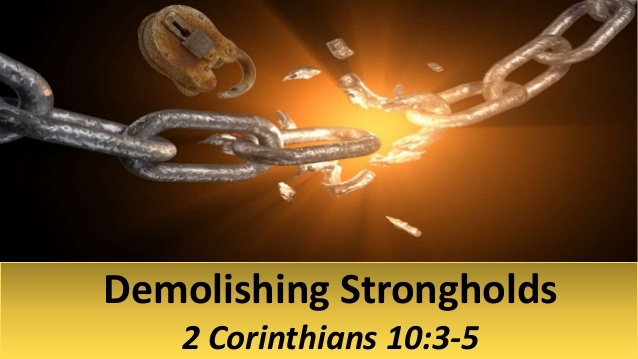 Confront your strongholds. Strongholds may be undermining your belief system, but God’s promises are still on us.

The real battle is fought in the heart with our faith. The mind and heart battles against one another. We don’t battle with physical weapons. Satan wants to destroy everything you believe about the goodness of God. You need to confront strongholds in your life. Strongholds are not addictions or personality traits. It is an undermining of your belief system. Emotions are to the soul what symptoms are to the body. Emotion is the energy that results from a stronghold. Strongholds are internal and hold us captive to God’s promises. Strongholds are a real enemy of the church. We have been put on this earth to be a witness to the world. We can’t accept the world’s word that the Lord has left us. God has not withdrawn His power. God has not withdrawn His promises. God has not withdrawn His love. Our God is sufficient today to do what He has always done and said He will do.

Wake up, people of God! There are groups that want to destroy Christianity and the church. Christians need to recognize this attack and be a voice for God.

If the Lord has never chastised you, you are not a child of God.

Hebrews 12:6
Whom the Lord loves, He chastises.

They were being chastised for sin. But God did not leave them forever for their enemy to continue to take their increase. The enemy will try to steal your harvest. God does not leave us in our strongholds. When Satan has convinced us God has left us and our strongholds have created negativity and doubt, God is still there. His promises are still on us. He will finish what he started in you.

*2 Corinthians 10:3-5
3 For though we live in the world, we do not wage war as the world does. 4 The weapons we fight with are not the weapons of the world. On the contrary, they have divine power to demolish strongholds.5 We demolish arguments and every pretension that sets itself up against the knowledge of God, and we take captive every thought to make it obedient to Christ.

*Judges 6:1-16
The Israelites did evil in the eyes of the Lord,and for seven years he gave them into the hands of the Midianites. 2 Because the power of Midian was so oppressive, the Israelites prepared shelters for themselves in mountain clefts, caves and strongholds. 3 Whenever the Israelites planted their crops, the Midianites, Amalekites and other eastern peoples invaded the country. 4 They camped on the land and ruined the crops all the way to Gaza and did not spare a living thing for Israel, neither sheep nor cattle nor donkeys. 5 They came up with their livestock and their tents like swarms of locusts. It was impossible to count them or their camels; they invaded the land to ravage it. 6 Midian so impoverished the Israelites that they cried out to the Lord for help.7 When the Israelites cried out to the Lord because of Midian, 8 he sent them a prophet, who said, “This is what the Lord, the God of Israel, says: I brought you up out of Egypt, out of the land of slavery. 9 I rescued you from the hand of the Egyptians. And I delivered you from the hand of all your oppressors;I drove them out before you and gave you their land. 10 I said to you, ‘I am the Lord your God; do not worship the gods of the Amorites, in whose land you live.’ But you have not listened to me.”11 The angel of the Lord came and sat down under the oak in Ophrah that belonged to Joash the Abiezrite, where his son Gideon was threshingwheat in a winepress to keep it from the Midianites.12 When the angel of the Lord appeared to Gideon, he said, “The Lord is with you, mighty warrior.”13 “Pardon me, my lord,” Gideon replied, “but if the Lord is with us, why has all this happened to us? Where are all his wonders that our ancestors told us about when they said, ‘Did not the Lord bring us up out of Egypt?’ But now the Lord has abandoned us and given us into the hand of Midian.”14 The Lord turned to him and said, “Go in the strength you have and save Israel out of Midian’s hand. Am I not sending you?”15 “Pardon me, my lord,” Gideon replied, “but how can I save Israel? My clan is the weakest in Manasseh, and I am the least in my family.”16 The Lord answered, “I will be with you, and you will strike down all the Midianites, leaving none alive.”