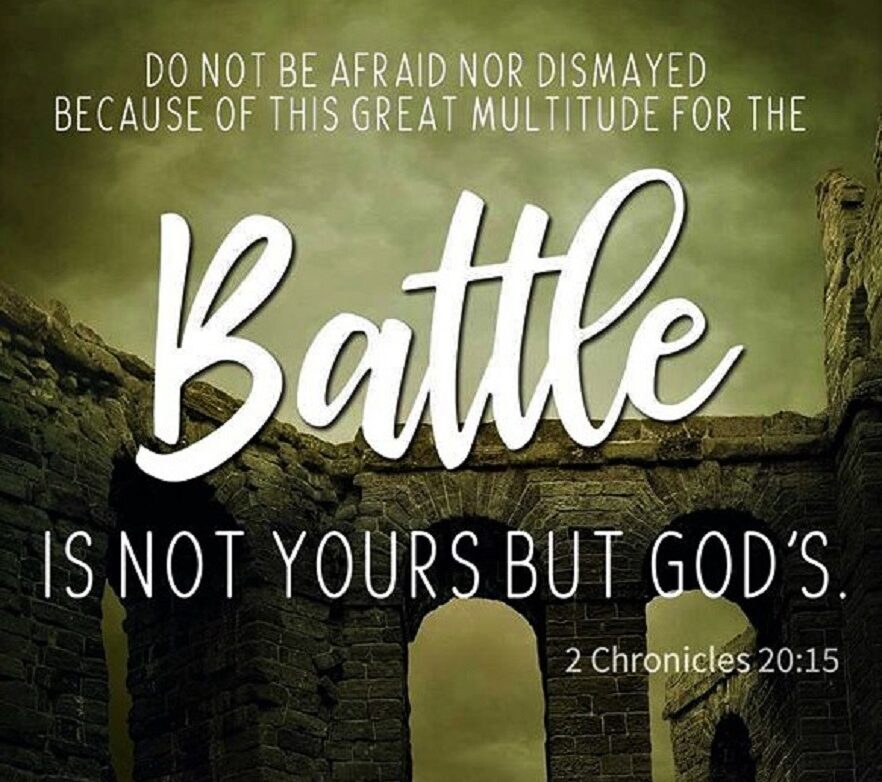 A prayer of desperation will bend God’s ear to His children. Prayer, praise, undeterred belief will get you through the darkest hours.

God’s people are blessed. God has blessed His people richly. That isn’t to say we do not live in a world under a curse. We will meet hardships and circumstances that cannot be explained. Followers of Jesus are also sinners. We have times we must repent for acting in a manner that is in opposition to how we desire to act. King David was a man after God’s own heart. But David had a terrible moral failure. He prayed fervently for God to restore his soul and the joy of his salvation. David prayed for mercy on his life. Prayer can shut up the rain. It can open the rains. Prayer is the essence of communication with God.

Jehoshaphat was a member of the lineage of King David. He was the king of the southern kingdom. The king of the northern kingdom was the wicked Ahab married to idolatrous Jezebel. Ahab’s son became king after his father’s death. Jehoshaphat was a great man of prayer. When war between the nations broke out instigated by Ahab’s son and his mother, the first thing Jehoshaphat does is seek the Lord in prayer. His prayer had 6 important steps.

Pray prayers that fervently reach the Lord. In times that it feels like heaven can’t hear, stay there and pray. Greet Him with thanksgiving, praise, and singing and pray.

2 Chronicles 20:3-4
And Jehoshaphat feared, and set himself to seek the Lord, and proclaimed a fast throughout all Judah. And Judah gathered themselves together, to ask hello of the Lord: even out of all the cities of Judah they came to seek the Lord.

Our hope comes from God. Our hope is in a God Who made the heavens and the earth. He heals. The elements of the earth bow to Him.

2 Chronicles 20:5-6
Then Jehoshaphat stood in the assembly of Judah and Jerusalem in the house of the Lord, in front of the new courtyard and said, “O Lord, God of our fathers, are You not the God who is in heaven, and do You not rule over all the kingdoms of the nations: Power and might are in Your hand, and no one can stand against you.”

We can admit weakness, but not without hope.

2 Chronicles 20:12
“O our God, wilt thou not judge them? for we have no might against this great company that cometh against us; neither know we what to do : but our eyes are upon thee.”

4. Put Our Eyes Upon God

There is no trap or device of the devil that can prosper against God when we have our eyes on Him.

Psalm 25:15
My eyes are ever toward the Lord, for He will pluck my feet out of the net.

2 Chronicles 7:14-16
If my people, which are called by my name, shall humble themselves, and pray, and seek my face, and turn from their wicked ways; then will I hear from heaven, and will forgive their sin, and will heal their land. Now mine eyes shall be open, and mine ears attend unto the prayer that is made in this place. For now have I chosen and sanctified this house, that my name may be there for ever: and mine eyes and mine heart shall be there perpetually.

Sometimes God calls us to leave the battle to Him but to take a stand that what He has said is real and will come to pass just as He has said. Proclaim to be on the Lord’s side in all circumstances. The Lord will be with you.

2 Chronicles 20:13-1
All the men of Judah, with their wives and children and little ones, stood there before the Lord. Then the Spirit of the Lord came on Jahaziel son of Zechariah, the son of Benaiah, the son of Jeiel, the son of Mattaniah, a Levite and descendant of Asaph, as he stood in the assembly. He said: “Listen, King Jehoshaphat and all who live in Judah and Jerusalem! This is what the Lord says to you: ‘Do not be afraid or discouraged because of this vast army. For the battle is not yours, but God’s. Tomorrow march down against them. They will be climbing up by the Pass of Ziz, and you will find them at the end of the gorge in the Desert of Jeruel. You will not have to fight this battle. Take up your positions; stand firm and see the deliverance the Lordwill give you, Judah and Jerusalem. Do not be afraid; do not be discouraged. Go out to face them tomorrow, and the Lord will be with you.’”

Even in fear and doubt, worship. We know that Christ has won the ultimate victory. Fight for the right perspective during the darkest hours.

2 Chronicles 20:18-22
Jehoshaphat bowed down with his face to the ground, and all the people of Judah and Jerusalem fell down in worship before the Lord. 19 Then some Levites from the Kohathites and Korahites stood up and praised the Lord, the God of Israel, with a very loud voice. Early in the morning they left for the Desert of Tekoa. As they set out, Jehoshaphat stood and said, “Listen to me, Judah and people of Jerusalem! Have faith in the Lord your God and you will be upheld; have faith in his prophets and you will be successful.” After consulting the people, Jehoshaphat appointed men to sing to the Lord and to praise him for the splendor of his[a] holiness as they went out at the head of the army, saying:“Give thanks to the Lord, for his love endures forever.” As they began to sing and praise, the Lord set ambushes against the men of Ammon and Moab and Mount Seir who were invading Judah, and they were defeated.

Labour not to be rich: cease from thine own wisdom.
Proverbs 23:4
Manage Cookie Consent
We use cookies to optimize our website and our service.
Manage options Manage services Manage vendors Read more about these purposes
View preferences
{title} {title} {title}