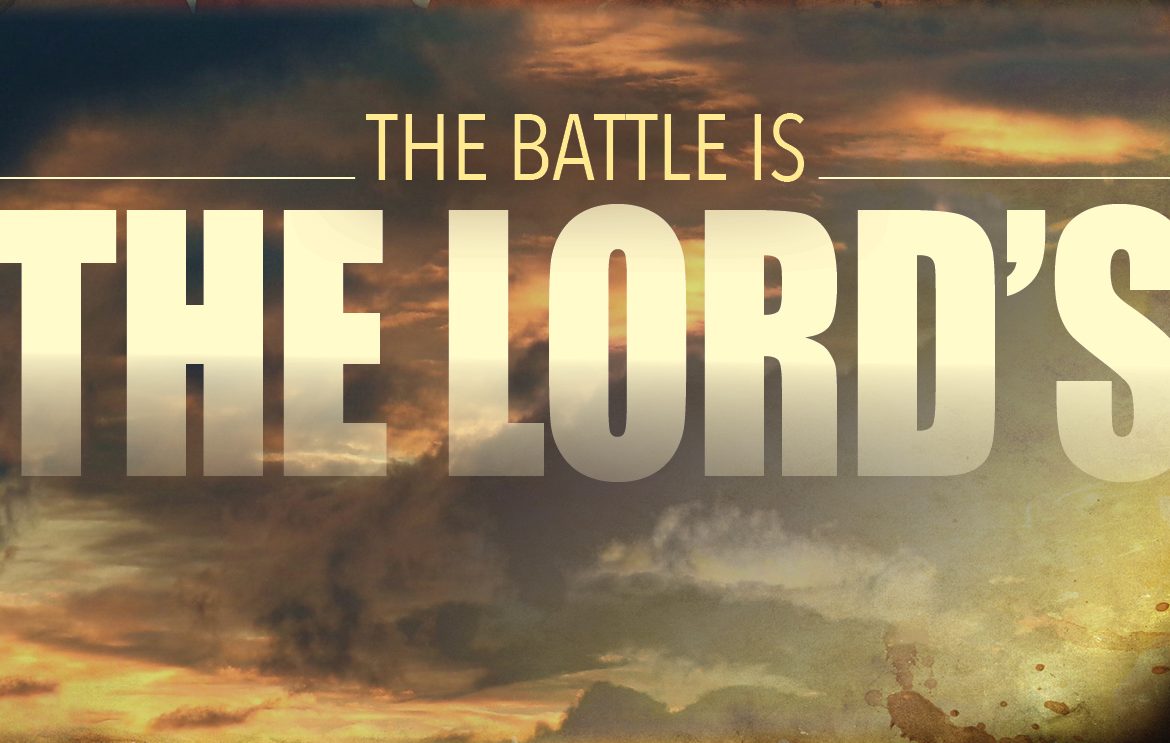 Sometimes a battle comes out of nowhere! We may be enjoying life, good health, a good home, strong relationships in our families, and out of nowhere, something we didn’t see coming, just attacks our peace of mind, and what was a blessed life, suddenly becomes bereft with loss, pain, and sorrow.

The Battle Is The LORD’S

Being a pastor for nearly a half century, I have attended many Pastor’s Conference’s, and spoke at many of them myself. Amidst all the rhetoric, slogans seem to find their way into the discussion in most of them, one of which is “Choose your Battles.” In family and marriage counseling we hear “be careful not to use battle language.” So, the wise church leader, Parent, and business manager must become a strategist when confronting divisive issues that can prove deadly in a home, church, school, ministry, or community. Certainly, prayer and consultation with God’s Word is important, but good common sense can go a long way in helping us avoid devastating and debilitating struggles in faith and practice.

Sometimes a battle just comes out of nowhere! In what you thought was a calm and serene emotional landscape, suddenly, a person is cast into the midst of an out of control wildfire of anger and hostility. Suddenly you are faced with a battle with a spiritual enemy that took you completely by surprise. In our text, Jehoshaphat, king of Judah found himself in a fight to survive. He didn’t ask for it. He had done nothing to provoke it, but now, like it or not, he was forced to fight a battle, ill prepared and no plan of action.

I. A Battle Usually Comes When Things Are Good

Jehoshaphat was a good king. He was leading Judah in a good direction. He continued the revival that his father Asa had begun in his reign. He was bringing back the reading of God’s Word. He was restoring the rightful worship of the LORD. He was repairing the walls of the cities and fortifying them with protection from Judah’s enemies. He destroyed the pagan places of worship and repaired the Temple, and restored the prophets to a place of prominence.

2 Chronicles 17:5,6
5. Therefore the LORD established the kingdom in his hand; and all Judah brought to Jehoshaphat presents; and he had riches and honour in abundance.
6. And his heart was lifted up in the ways of the LORD: moreover he took away the high places and groves out of Judah.

Our adversary the devil usually launches his attacks at a time of high tide spiritually. Those transition points in the life of a church are extremely precarious times. “We are not ignorant concerning satan’s devices”, and we should be all the more aware of his strategy when it Comes to defending against his intrusion into the purpose and blessing of God. The same is true in our individual lives. We may be enjoying life, good health, a good home, strong relationships in our families, and out of nowhere, something we didn’t see coming, just attacks our peace of mind, and what was a blessed life, suddenly becomes bereft with loss, pain, and sorrow.

II. A Word Of Impending Attack

Oftentimes when we realize that we are in an uninvited attack, it sends us to our knees. Jehoshaphat knew the story of the two nations that had been spared when the children of Israel entered the Promised Land. After being spared and not destroyed, now they arise to attack Judah, and destroy what God has built up.

The enemy is coming in, and only about 25 miles away. No time to do anything else but go to God. Something about an urgency to make you do what you should have done a long time ago. He had the mindset to seek the Lord. He knew what he would do when that time came because that was predetermined. He had learned to seek the Lord, and not listen to some who would steer you astray.

He had barely made it out of an unholy alliance with Ahab. He could have been killed in that battle, but he learned not to make those unholy alliances, and try to fight someone else’s battles that does not belong to him. You see, christians need to be careful what you join yourself to. Don’t spend your time fighting battles that aren’t yours, because you will not have strength to fight battles of your own. If you are fighting to change someone else, your fighting the wrong battle. Your peace is your responsibility. Another person’s peace is not your battle. Don’t be so quick to fight someone else’s battles. Unreliable information can cause you so much emotional drama. You don’t need someone’s drama! It’s all the battle you can fight to handle your own drama!

Jehoshaphat had a place to go to in time of attack. The battle was bitter than him. This battle had sneaked up on him. Listen to his strategy.

When you don’t know what HE is doing now, remember what HE has done in the past. Jehoshaphat rehearses what God has done. On one hand he is praising God, but on the other hand He is involving God in the battle. This battle is not about us, its about YOU GOD.

Last time I got in trouble, it was about me. I own that. But this time, LORD its not about me, its about YOU. They want to fight me because they don’t like what you do, and they don’t like YOU because YOU are the FRIEND of Abraham.

All of the attack of the enemy is about possession. If you are God’s possession, its God’s problem. You are His daughter, Son, Heir, and Joint Heir with Christ. Because of who you belong to, God fights for His possession. Change the focus and minimize your efforts, and maximize His efforts.

Pastor, why did he go through all of those descendants to bring them up to this time? Because every one of those names represents a generation that experienced the faithfulness of God. Each of those persons experienced the goodness and protection of God. Sometimes we need to be reminded of where He brought us from, and the mighty deeds that were done to bring us to this hour.

IF THE PROPHET HAD NOT SPOKEN, AND JUDAH WOULD HAVE GONE OUT TO BATTLE, THEY WOULD HAVE LOST!

Some of you are fighting today, and losing, because you are fighting on the wrong level. The nature of the battle determines the strategy of the victory. You have to wage war at the proper level. You can never accomplish spiritual victory by carnal means.
Our enemies are the world, the flesh, and the devil.

Friendship with the world is enmity with Christ.

To be carnally minded is death, but spiritually minded is life and peace.
Your adversary, the devil walketh about as a roaring lion, seeking whom he may devour.

Ephesians 6:12 We wrestle not against flesh and blood.

I’ve learned that many times people mask their fear with anger. They are close akin. Sometimes we want to appear big and boisterous on the outside because we feel so little on the inside. Sometimes we have to realize that “He’s not mad at me!”, “She’s not angry with me!” She’s afraid, and her way of venting that intense emotion is to get loud and appear hostile.

You see, God can meet our needs what ever they are. Its not about willpower, its really about worship!

GOD wants HIS Battle back!

18. And Jehoshaphat bowed his head with his face to the ground: and all Judah and the inhabitants of Jerusalem fell before the LORD, worshiping the LORD.

He didn’t have to fight it, but he did have to face it. Tomorrow, go down there and get in position; not so that you can fight, but so you can SEE. If you worship and make God so big, then no foe can stand against you.

Jesus told Peter, “Put your sword up!” Sometimes its better to go to the cross and see a greater victory than to do battle. His fear caused him to react in anger, but Jesus knew that a far greater battle was to be won. Jesus would not let Peter’s anger distract from the greatest victory of all history. It wasn’t about one man, Peter. It was about a victory for all mankind. Satan tried to shift the focus to one man’s crazy actions, but Jesus put the ear back on the head of Malcus and walked that path to Calvary’s cross to win for us a cure for Adam’s sin, and reconcile us back to Our Heavenly Father.

2 Chronicles 20:20
20. And they rose early in the morning, and went forth into the wilderness of Tekoa: and as they went forth, Jehoshaphat stood and said, Hear me, O Judah, and ye inhabitants of Jerusalem; Believe in the LORD your God, so shall ye be established; believe his prophets, so shall ye prosper.
21. And when he had consulted with the people, he appointed singers unto the LORD, and that should praise the beauty of holiness, as they went out before the army, and to say, Praise the LORD; for his mercy endureth for ever.
22. And when they began to sing and to praise, the LORD set ambushments against the children of Ammon, Moab, and mount Seir, which were come against Judah; and they were smitten.

*2 Chronicles 20:15-20
15. And he said, Hearken ye, all Judah, and ye inhabitants of Jerusalem, and thou king Jehoshaphat, Thus saith the LORD unto you, Be not afraid nor dismayed by reason of this great multitude; for the battle is not yours, but God’s.
16. Tomorrow go ye down against them: behold, they come up by the cliff of Ziz; and ye shall find them at the end of the brook, before the wilderness of Jeruel.
17. Ye shall not need to fight in this battle: set yourselves, stand ye still, and see the salvation of the LORD with you, O Judah and Jerusalem: fear not, nor be dismayed; to morrow go out against them: for the LORD will be with you.
18. And Jehoshaphat bowed his head with his face to the ground: and all Judah and the inhabitants of Jerusalem fell before the LORD, worshiping the LORD.
19. And the Levites, of the children of the Kohathites, and of the children of the Korhites, stood up to praise the LORD God of Israel with a loud voice on high.
20. And they rose early in the morning, and went forth into the wilderness of Tekoa: and as they went forth, Jehoshaphat stood and said, Hear me, O Judah, and ye inhabitants of Jerusalem; Believe in the LORD your God, so shall ye be established; believe his prophets, so shall ye prosper.