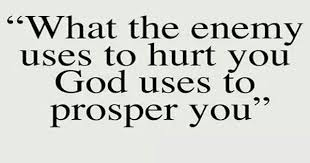 [image: image.png] I am not sure very many people can identify with what Job faced in his walk with God. God only knew how strong Job’s faith was and did not allow him to face anything he was not strong enough to handle through his faith in God. What faith Job had! He lost his whole family, developed sores that covered his entire body, was deserted by those whom he thought was his friends, and lost all of his earthly possessions. What did Job do? He simply continued to trust God and believe He was still in control of everything. Job knew he could not and did not need to vindicate himself. Job knew in whom he had believed and trusted God to deliver him. He believed the promise of God that he would never leave him or forsake him. Job’s faith secured him a bigger, brighter future than anything he had in his past. What a great example for us to follow in time so difficulty in our lives. (Isaiah 54:17 No weapon forged against you will prevail, and you will refute every tongue that accuses you. This is the heritage of the servants of the Lord, and this is their vindication from me, declares the Lord.) No matter what you have to go through, no matter how hard it may be to face, and no matter where it leaves us on life’s ladder of success, you know that God is a God of Justice. It may take a few days, a few months, or even a few years, but God will vindicate you if you do not lose your faith. When we attempt to vindicate ourselves, we only make matters worse. We have to trust that God sees all and knows all and is able to cause those weapons forged against you to fail. Hang in there! God’s got this!! Pastor Don