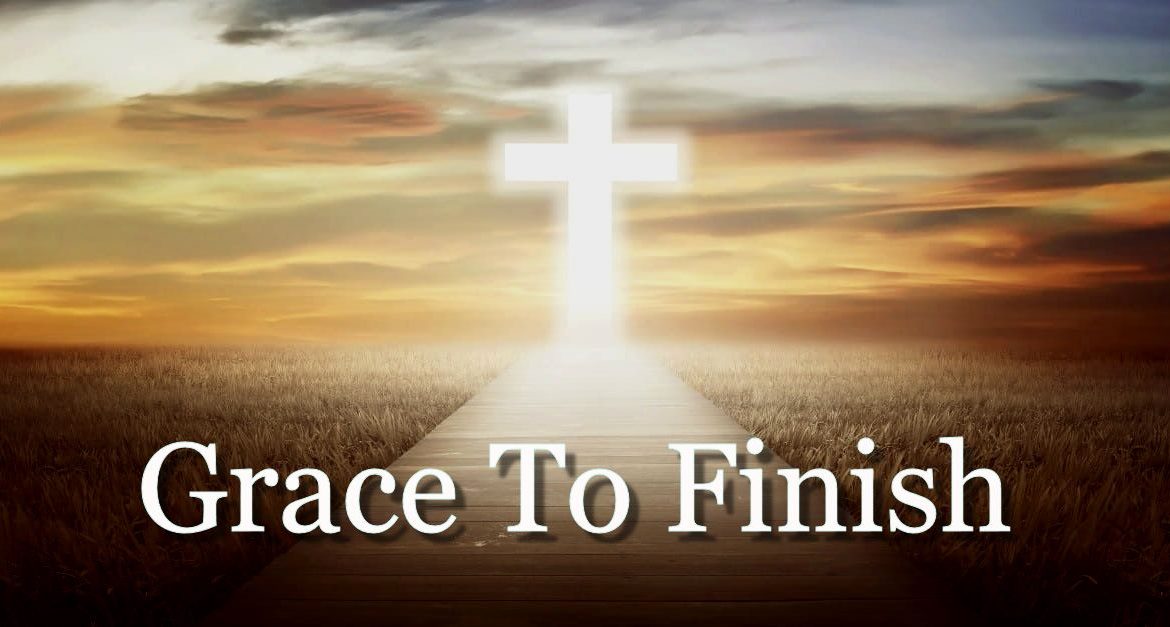 John 19:28-30
28. After this, Jesus knowing that all things were now accomplished, that the scripture might be fulfilled, saith, I thirst.
29. Now there was set a vessel full of vinegar: and they filled a spunge with vinegar, and put it upon hyssop, and put it to his mouth.
30. When Jesus therefore had received the vinegar, he said, It is finished: and he bowed his head, and gave up the ghost.

Perhaps the greatest Christian who ever lived was heard to say, “I am what I am by the grace of God.” He also said, “The life that I now live, live by the faith of the Son of God.” He also said, “In Him we live, and move, and have our being.” Sure, grace and faith are the spiritual intangibles we can’t see, but each of those two sources of spiritual energy are very real to believers; the results of knowing Jesus in a powerful way, as our compass, and constant bearing for navigating this journey we call life.

I know that favor sometimes flows out of unlikely sources. If there is one thing I have learned over the past 32 years at Harvest is that favor can come through people that I did not expect…… people that I was not close to, or people that were not good to me. Once the children of Israel were given water out of a rock. God kept moving them around so that they would not camp out in a place God intended for them to pass through.

Sometimes blessing can come out of the heart of a person that is considered hard. Favor seldom comes from where we expect it. It seems that God loves to surprise us when grace is bestowed upon us.

Sometimes I think God wants to challenge our attachments to this present world as in the case of Demas who forsook the imprisoned Apostle Paul. Paul simply concluded, “Demas hath forsaken me, having loved this present world.” II Tim. 4:10

Recently, I was preparing messages for the Easter weekend, reading again the crucifixion story and the seven sayings of Jesus on the cross. He is moving toward a glorious resurrection, but to get there He has to go through a humiliating crucifixion. You see faith does not mean that you understand why you are going through a mess while you are going through it. Faith means that you trust God to give you whatever you need to get through it knowing “that the suffering of this present time is not worthy to be compared to the glory that shall be revealed in us.” Rom. 8:18. 1 hear GOD saying, “My grace is sufficient for you.” 2 Cor. 12:9

Yes, grace and favor can come from a seed you planted but saw no immediate results. You may have even given up on it, counted it a prayer never answered, walked away, and forgotten all about it. But I want to assure you that our Heavenly Father has not forgotten about it, and when the fulness of time comes, He will send forth all-sufficient grace.

Something you may have planted in a season past, at the most remarkable time, will spring up to give grace for a special need. For if He was not planted on Friday, there would be not a Sunday morning of victory over death, hell, and the grave. True, the events of that Friday were the most horrific and brutal imaginable, but The Resurrection could never be realized without a death and burial.

If you remember there were seven cross sayings, three before the darkness, one during the darkness, and three after the darkness. He prayed forgiveness for His murderers, commendation to care for His mother, assurance to a dying thief, a cry of anguish to The Father from the Son, the final statement of completion, but the saying that intrigues me in such a powerful way; He cried out, “1 thirst”.

B. THE FIFTH CROSS UTTERANCE, “I THIRST”

John 19:28
After this, Jesus, knowing that all was now finished, said (to fulfill the scripture) “I thirst”.

Listen to the finality, the accomplishment, the completion of His destiny. With that thought in mind, He said, “I thirst.”

How Can God Need A Drink? How Can Living Water say “I’m Thirsty?” l understand you and I can be thirsty, after all we need water to go on living. It is an essential; but the same voice that made clouds to swell with condensation to make rain, that same voice that broke up the fountains of the deep and flooded the land, the same voice from a parched throat now cries out “I Thirst!”

What an awesome sight, the Savior of the world, the Son of God hanging on a cruel cross, suffering and dying for our redemption. The Maker of Heaven, Beloved of The Father, the Lord of Glory in need of a drink of water.

He was forever God, and forever man. He was not a humanized God, He was God-Man.

Hebrews 2:17
Wherefore in all things it behoved him to be made like unto his brethren, that he might be a merciful and faithful high priest in things pertaining to God, to make reconciliation for the sins of the people.

“He hath made me desolate and faint. “

His suffering was unparalleled; and as great as it was, His suffering was not the cause of His thirst. There was a far greater and higher motive which prompted Him. In fact the statement, “I Thirst!” further evidences the fact that He was in perfect submission to the will of the Father. He Who caused water to flow from the rock in the wilderness, could have provided unlimited water to drink. He had infinite resources at His disposal, but the thirst is part of the redemptive price that was paid for our eternal salvation from sin and its consequences.

Why then did He hang there with parched lips? The answer is found in the parenthesis of verse 28. “That the scripture might be fulfilled.”

In death as in life, He refused to minister to His own need apart from that Word by which He lived. So now He makes known that need, not to get relief, but that the Scriptures might be fulfilled. The terrible thirst of the crucifixion is upon Him, but that was not enough to force Him to speak; but “it is written” was enough! What opened His mouth and moved Him to say “I Thirst”. Here it is:

Psalms 69:21
21. They gave me also gall for my meat; and in my thirst they gave me vinegar to drink.

He reviewed in a moment the entire scope of Messianic prediction, and realized that there was one more prophecy to be fulfilled. This is great proof that He was the Son of God. Notice the grace at work here; He thirsted on the cross, that we might drink the water of life freely, and thirst no more forever!

C. THE VESSEL OF VINEGAR v 29
The vessel of vinegar was a ration that was given to the soldiers

You see, there was an earlier time when a drink was offered to Him, but He refused. In our text, they gave Him. We have the cognitive imperfect, ” tried to give, offered.” This was a stupefying drinks says Dr. Wuest, which was usually offered to condemned malefactors through the charity of the women of Jerusalem, the intention being to deaden the sense of pain. This drink, Jesus refused.

Mark 15:22,23
22. And they bring him unto the place Golgotha, which is, being interpreted, The place of a skull.
23. And they gave him to drink wine mingled with myrrh: but he received it not.

Jesus refused this drink because He did not want to be stupefied, or His senses dulled, or His cognitive abilities to be numbed. He wanted to be focused and alert because there was over 300 prophecies that were fulfilled by the actions and decisions of the people involved in His death by crucifixion.

Matthew tells us that this first drink was vinegar and gall. Some commentators say that this was a drink to relieve pain and numb the senses and more importantly stop the flow of blood. Jesus refused anything that would inhibit the flow of blood, because He would later tell the disciple this is the blood of the NT which is shed for you.

Matt. 27:34
They gave him vinegar to drink mingled with gall: when he had tasted thereof, he would not drink.

Matt. 27:48
And straightway one of them ran, and took a spunge, and filled it with vinegar, and put it on a reed, and gave him to drink.

Notice that the sour wine was absorbed by a sponge, wrapped in hyssop, placed on a reed, and extended to Jesus suspended on the cross. What a vivid picture of God’s wrath and judgment of sin, satisfied at the sacrificial offering of the Lord Jesus.

The importance of Hyssop at Passover:

This was the OT way of purging and cleansing.

Hebrews 9:19
For when Moses had spoken every precept to all the people according to the law, he took the blood of calves and of goats, with water, and scarlet wool, and hyssop, and sprinkled both the book, and all the people,

Travel with me now to a different time. We are no longer in Moses Camp with hyssop and the OT covenant, but now we are gathered on a hill far away; a place where sinners talk smut, and soldiers gambled, and they that shoot out the lip are heard shouting blasphemous slander. But instead of an animal, a man who knew no sin hangs suspended between heaven and earth.

And as hyssop is applied to the animals offered by Moses and Aaron, here again the hyssop is extended to another sacrifice who is once offering Himself for the sins of the whole world, not just at a day of Atonement but His blood is the blood of a better covenant, and an eternal sacrifice, the blood of the Only Begotten Son of the Living God. A new and living way!

IT IS FINISHED!
His death on the cross is sufficient grace for you to endure, persevere, get through the trial, endure the affliction, keep the faith, pay the price, take a stand.