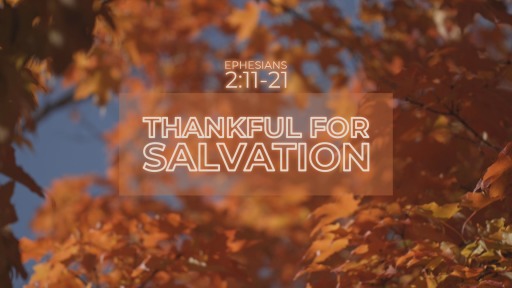 In a time that it is hard to find something for which to be thankful, be thankful for salvation!

Samaritans were regarded beneath Jews. Jews traveling north would not even travel through Samaria. Those living in Samaria were descendants of Jews left because of disease when Jews were taken captive to Babylonia. When the Jews returned 70 years later, those left had intermarried and thus considered below Jews.

In Luke 17:11-17, Jesus guided his disciples through Samaria traveling to Jerusalem. They met lepers on the road. It was law to stay 50 feet from a leper after the stricken person shouted, “Unclean, unclean!” These men did as the law required, but when they saw Jesus they also begged for mercy from Jesus. Jesus instructed them to go and show themselves to the priests. They immediately obeyed and as they traveled they were healed. They made a move to obey before the healing was evident.

Others who obeyed before the healing:

When we obey, we will see the blessings of God. Faith follows function. When you act on Jesus commands, your faith will strengthen. Function in kindness, joy, thankfulness and your faith will carry you through.

Ten men were healed that day. Only one got a new heart. Only one turned back to glorify and thank Jesus. He was a Samaritan. He was a minority and an outcast. But he chose remember to give thanks.

The History of our Thanksgiving

Thanksgiving was first held in the 1600’s after a winter had reduced a group of 406 to a group of about 60. They chose to give thanks after this terrible tragedy. They chose to focus on the positive and the blessings left in their life.

George Washington called for Americans to have a day of Thanksgiving. Abraham Lincoln set the first Thursday in November as a national day of Thanksgiving and Congress changed that to the fourth Thursday in November. Today our country has much to distress us, but we must continue to thank God for what we do have. This country is better for the praying people that serve God and choose to be thankful for salvation and His mercy and grace. He cares about us. God loves us. He is concerned about our daily lives.

How Can We Be Thankful

At one time, we were all deemed unclean. Sin, like the laws of leprosy, separates and alienates us. But God, who is rich in mercy, gave us new life. He washed us with the blood of the Lord Jesus to make us clean of any uncleanness. We now have peace with God. We can wear a garment of praise. Over the armor of God that sees us through battles we need to put on the garment of praise.

Blessed is the nation whose God is the Lord, the people he chose for his inheritance.

made us alive with Christ even when we were dead in transgressions—it is by grace you have been saved.

“Come now, let us settle the matter,”
says the Lord.
“Though your sins are like scarlet,
they shall be as white as snow;
though they are red as crimson,
they shall be like wool.”