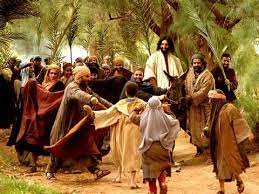 Jesus was not what the Jews expected to be their promised King. God doesn’t always answer us the way we expect or hope He will. He will always answer the way best for us.

The church that recognizes Jesus as the rightful heir to the throne will be the church that sees Him in eternity. Jesus was in the family lineage of King David answering the prophecies of the Old Testament. All the prophecies were fulfilled. The Jews expected a King according to what they had been taught. This King would rescue them, save them, defeat their enemies. They expected this King to defeat the Romans and relieve them from their oppression.

Palm Sunday in Jerusalem was a day of celebration and anticipation of the King that would come and solve all their problems. The population of Jerusalem for the Passover celebration and this Palm Sunday was triple its usual. All available rooms were full. Jesus did not stay in the best of accommodations but in an area considered a ghetto community.

Not What They Expected

When Jesus entered Jerusalem on the back of a donkey foal (Zechariah 9:9), it was the first time the Jews acknowledged Him as the son of God. They threw palm branches and their cloaks onto to ground before Him. They shouted “Hosanna” which means save us now! Despite His reception, this was not the way most leaders and kings entered their kingdoms. The Jews expected their King to outdo any procession of past Roman leaders. Through His humble entry He fulfilled the promise that all fear would be removed. There are 365 times that “Fear Not” appears in the Bible. There is a ‘fear not’ for today and one for tomorrow and the next day after that. He came to remove our fears of how this world will try to defeat us.

Jesus did not come to set up a royal kingdom on earth. Jesus came to teach servitude. He carried our burden so we would not have to. Jesus did the work through death to redeem us of sin. Our King now sits in Heaven as Faithful and True and that King of Kings and Lord of Lords!

Read It In the Word

John 12:12-15
12 The next day the great crowd that had come for the festival heard that Jesus was on his way to Jerusalem.13 They took palm branches and went out to meet him, shouting,
“Hosanna!”
“Blessed is he who comes in the name of the Lord!”
“Blessed is the king of Israel!”
14 Jesus found a young donkey and sat on it, as it is written:
15 “Do not be afraid, Daughter Zion;
see, your king is coming,
seated on a donkey’s colt.”

Zechariah 9:9
9 Rejoice greatly, Daughter Zion!
Shout, Daughter Jerusalem!
See, your king comes to you,
righteous and victorious,
lowly and riding on a donkey,
on a colt, the foal of a donkey.

Titus 3:5
5 he saved us, not because of righteous things we had done, but because of his mercy. He saved us through the washing of rebirth and renewal by the Holy Spirit,

Revelation 19:11-16
11 I saw heaven standing open and there before me was a white horse, whose rider is called Faithful and True. With justice he judges and wages war. 12 His eyes are like blazing fire, and on his head are many crowns. He has a name written on him that no one knows but he himself. 13 He is dressed in a robe dipped in blood, and his name is the Word of God. 14 The armies of heaven were following him, riding on white horses and dressed in fine linen, white and clean. 15 Coming out of his mouth is a sharp sword with which to strike down the nations. “He will rule them with an iron scepter.” He treads the winepress of the fury of the wrath of God Almighty. 16 On his robe and on his thigh he has this name written:

Philippians 3:21
21 who, by the power that enables him to bring everything under his control, will transform our lowly bodies so that they will be like his glorious body.