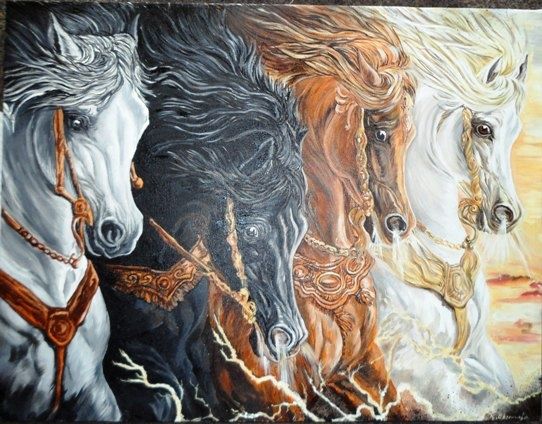 A compelling time is when the Lamb is opening the seals of the Book of Life and the four horsemen are released in Revelation chapter 6. Pastor continues his series.

While no one knows the day Christ will return, Paul saw a vision of the end days while imprisoned on the island off Patmos. The book of Revelation relates this vision. The early chapters describe the rapture, Jesus’s return and the battle of Armegeddon. Daniel 9:24-27 describes what the saints will be doing in heaven during this time. Now we are at Revelation chapter 6 when the Lamb is opening the seals of the Book of Life and the four horsemen are released. Pastor breaks down details of each horse and rider.

The rider of the first white horse is the psuedochristos or “another christ” or “the deceiver”. This is not Jesus. Jesus is in heaven breaking the seals. This rider wears a crown. Jesus wears many crowns. The rider’s crown was awarded to him by men. Jesus wears crowns because He is the King of Kings. The rider carries a bow. Jesus carries a sword. This rider will be a man proclaiming peace. He carries a bow but no arrows. He will enter with a pitch for peace without blood shed. He’ll deceive with promises of peace and tranquility. He will be a man of power. He will be given the key to the world after the world has denied this power to the Lord.

2 I looked, and there before me was a white horse! Its rider held a bow, and he was given a crown, and he rode out as a conqueror bent on conquest.

The next horse is red. It is a color of fire and blood shed. The horse and rider unleash war on the earth such as we have never known. This war will involve all nations of the world.

Revelation 6:4
4 Then another horse came out, a fiery red one. Its rider was given power to take peace from the earth and to make people kill each other. To him was given a large sword.

The black horse rider signifies a time of want and lack. Food and necessities will be rationed. The scales in his hand signifies a madated amount given to each man. It will be a time of hard choices and starvation.

5 When the Lamb opened the third seal, I heard the third living creature say, “Come!” I looked, and there before me was a black horse! Its rider was holding a pair of scales in his hand.

The fourth horse is a pale horse. This horsemen brings much death, brutality, and devastation.

8 I looked, and there before me was a pale horse! Its rider was named Death, and Hades was following close behind him. They were given power over a fourth of the earth to kill by sword, famine and plague, and by the wild beasts of the earth.

Those who call Jesus their Lord and Savior will have their name read from the Book of Life. Praise God! We will miss the release of the four horsemen of Revelation and the devastation and deceit these horsemen will bring.