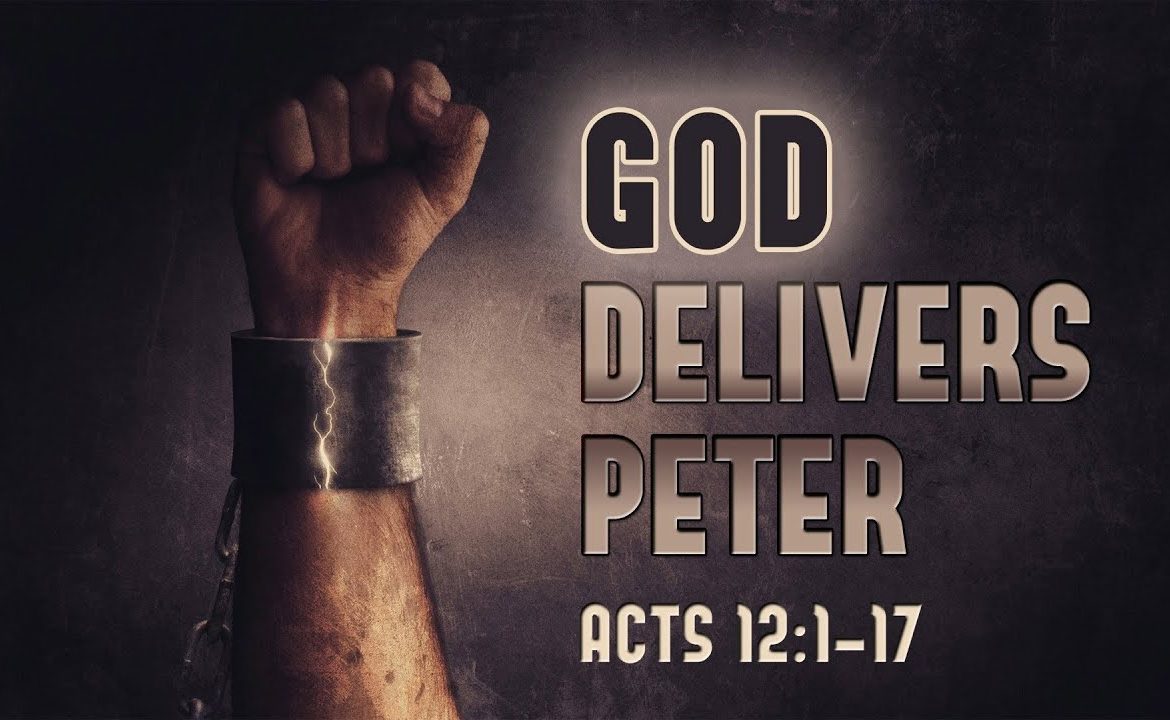 The purpose and plan of God will always supersede the activity of those who persecute and malign the work of God. Our God Who controls all things, is never surprised nor caught off-guard by the malicious deeds of evildoers. No matter what people do to you, all is working for the good for those who fear and serve Him.

ACTS 12:1-5
1. Now about that time Herod the king stretched forth his hands to vex certain of the church.
2. And he killed James the brother of John with the sword.
3. And because he saw it pleased the Jews, he proceeded further to take Peter also. (Then were the days of unleavened bread.)
4. And when he had apprehended him, he put him in prison, and delivered him to four quaternions of soldiers to keep him; intending after Easter to bring him forth to the people.
5. Peter therefore was kept in prison: but prayer was made without ceasing of the church unto God for him.

The purpose and plan of God will always supersede the activity of those who persecute and malign the work of God. Our God Who controls all things, is never surprised nor caught off-guard by the malicious deeds of evildoers. No matter what people do to you, all is working for the good for those who fear and serve Him.

The church prayed fervent intense, continual, anointed, specific, and painful prayers. Their praying was earnest and sincere, loud, interactive and bold, prevailing and vocal. Even though it was tiring and draining, they prayed; though it was disappointing they prayed, though they had no indication it was working they did not stop praying. It was the kind of praying as Gethsemane. It was what Jesus called prayer that moves the hand of God. Prayer that could best be described as prevailing prayer.

We just finished a study of the Seven Churches of Asia. Last Sunday we preached about Laodicea, and the last part of that message was a revelation of Jesus knocking at the door of that church.

Living in relationship with God, you must know the knock at your hearts door. Over time you will discern his knock. To many, God knocks with a sledgehammer. We preach about a God who storms the camp of the enemy, and teach that He is omnipotent, and non can resist Him. But many times we open the door and experience the surprise when we find out Who was knocking!

A knock at the door can be a glorious opportunity, or it may be the introduction of a season of struggle, pain, or hardship. A knock at the door may be information that will change your life forever, or it may be just another sales gimmick. Did you ever stop to consider that the knock of opportunity and the knock of opposition may be one and the same! Sometimes when you open the door, you would love to send it away, but sometimes God sent that to grow me and teach me.

The early church was beset by many challenges. The kingdom of God was spreading and advancing. As scripture says, “many are the afflictions of the righteous. It was a daily walk of faith and courage to confront the many obstacles of every day life in the first century. Chapter ten records a time of famine in the city of Jerusalem, and many of the churches took offerings to help the struggling church at Jerusalem. And now they are about to encounter persecution, fear and threat of the highest order They were led by strong leaders, and news of the death of James was a powerful blow against their faithful resolve and commitment. James was one of the three of the inner circle of disciples, and a prominent leader of the early church. He was murdered by Herod’s henchmen, a martyr, dying for the word of his testimony and the cross of the Lord Jesus.

Now in addition, Peter, another of the three of the inner circle is imprisoned, and the murderous intention of a maniacal monarch has been announced for Peter. Situation and prognosis is all but hopeless. The mood is subdued and difficult. Without the personalities they had depended upon since the beginning, brought about questions that assaulted their faith with cruel and intense fear and dread. What are we going to do now? Who is going to lead us now?

Its interesting to know that Peter doesn’t know the church is praying, and the people who are praying don’t know what Peter is doing. Sometimes you just have to trust, pray, and obey without knowing if its working in your life. You have to know that if the opposition and persecution increases, you must be gaining ground against the enemy, otherwise why would he even bother with you. You must be getting stronger and wiser because he is turning up the pressure! And when this season is over, you’ll have the joy of deliverance because you continued to prevail in prayer.

You see, those questions will creep in…am I even saved?; Is God with me? Are my prayers doing anything for me? Is this fasting working for me? Is going to church, and tithing, and singing in the Praise Team, and helping with “Drive Through Prayer” really doing any good? You know, the fact that the devil showed up, and is fighting so hard, defending his territory, hurling those insults, and spreading those lies, is because you keep on going and refuse to quit! The devil can’t handle that!

6. And when Herod would have brought him forth, the same night Peter was sleeping between two soldiers, bound with two chains: and the keepers before the door kept the prison.

What is Peter doing? Sleeping!
Sleeping between two soldiers. I’m in a tight place! I gotta sleep in between.

That does’t sound like the Peter who on the road to the cross was so terrified that Jesus said, “Get behind me Satan!” Maybe he was sleeping because he was seeing in his spirit and not what he saw with his eyes. Maybe the Holy Spirit which he had now received brought to his memory a time when he was in a boat trying to get to the other side. But because of what he saw, the wind and the waves, he was distraught, fearful, and exhausted. His eyes were seeing a raging chaos that threatened his life.

He learned when in the Garden of Gethsemane that striking back and cutting off body parts is not the answer. Retaliation can only complicate an already dreadful and complicated situation. He learned that all of my striking back and trying to inflict pain and obtain justice will only foster more anxiety and animosity. You have to get out of your fleshly response, and get out of the way, God will work in your favor to bring deliverance. Jesus taught him that rest is power! When the disciples’ lives were in jeopardy, Jesus was asleep in the hinder part of the boat.

He learned the lesson: God can do more while you are sleeping, than when you are struggling! Peter is not aware that God has more for him to do. He only knew that James was dead, and he was going to be killed too!

7. And, behold, the angel of the Lord came upon him, and a light shined in the prison: and he smote Peter on the side, and raised him up, saying, Arise up quickly. And his chains fell off from his hands.
8. And the angel said unto him, Gird thyself, and bind on thy sandals. And so he did. And he saith unto him, Cast thy garment about thee, and follow me.

HE GOT DRESSED EVEN THOUGH HE DID NOT KNOW WHERE HE WAS GOING!

AND SO HE DID!

LOOK AT THIS VERSE! THE CHAINS DID NOT COME OFF UNTIL HE GOT UP!

Obedience always precedes deliverance! When he got up, he realized that God is not through with me. I’ve got more work to do. You need to learn this. Keep walking in the light as He is in the light. Be stedfast, and fight the good fight. Unmovable! Let your light shine! Pray without ceasing! Set your face like a flint! God will take the chains off when you get up! If you are faithful in little things God will make you a ruler over many! Get up! Just do all you can do to stand! Come to church!

9. And he went out, and followed him; and wist not that it was true which was done by the angel; but thought he saw a vision.

He had to follow Him. Just the next step! There are many prisons: addiction, trauma, lying, deceiving, etc. Peter thought he was dreaming! Seeing a vision. We never recognize that something is of God until we get through it. Rom 8:28 usually is realized after the fact.

10. When they were past the first and the second ward, they came unto the iron gate that leadeth unto the city; which opened to them of his own accord: and they went out, and passed on through one street; and forthwith the angel departed from him.

God can do for you what no other power can do. God opened the gate for Peter but he walked through it. You can stand and wait if you like, but God wants you to go through it. Trust God. The worst that can happen has already happened at the cross of Jesus. You may not how, when, or where, but God will get you through it.

Suddenly after passing through, the angel left him!

He realized, I’ve now got to make a decision and go knock on a door.

11. And when Peter was come to himself, he said, Now I know of a surety, that the Lord hath sent his angel, and hath delivered me out of the hand of Herod, and from all the expectation of the people of the Jews.
12. And when he had considered the thing, he came to the house of Mary the mother of John, whose surname was Mark; where many were gathered together praying.
13. And as Peter knocked at the door of the gate, a damsel came to hearken, named Rhoda.

Sometimes we knock on a door that we have knocked on many times before. The same thing happens every time. But then God helps us and we knock on the right door. Peter went and knocked on the door where prayer was want to be made. There was a fire in Sister Mark’s house. They were still praying. This was the same group that had prayed for James! He was murdered, but they kept on praying for Peter. Setbacks, and disappointments happen, but don’t quit praying.

14. And when she knew Peter’s voice, she opened not the gate for gladness, but ran in, and told how Peter stood before the gate.
15. And they said unto her, Thou art mad. But she constantly affirmed that it was even so. Then said they, It is his angel.
16. But Peter continued knocking: and when they had opened the door, and saw him, they were astonished.
17. But he, beckoning unto them with the hand to hold their peace, declared unto them how the Lord had brought him out of the prison. And he said, Go shew these things unto James, and to the brethren. And he departed, and went into another place.
18. Now as soon as it was day, there was no small stir among the soldiers, what was become of Peter.