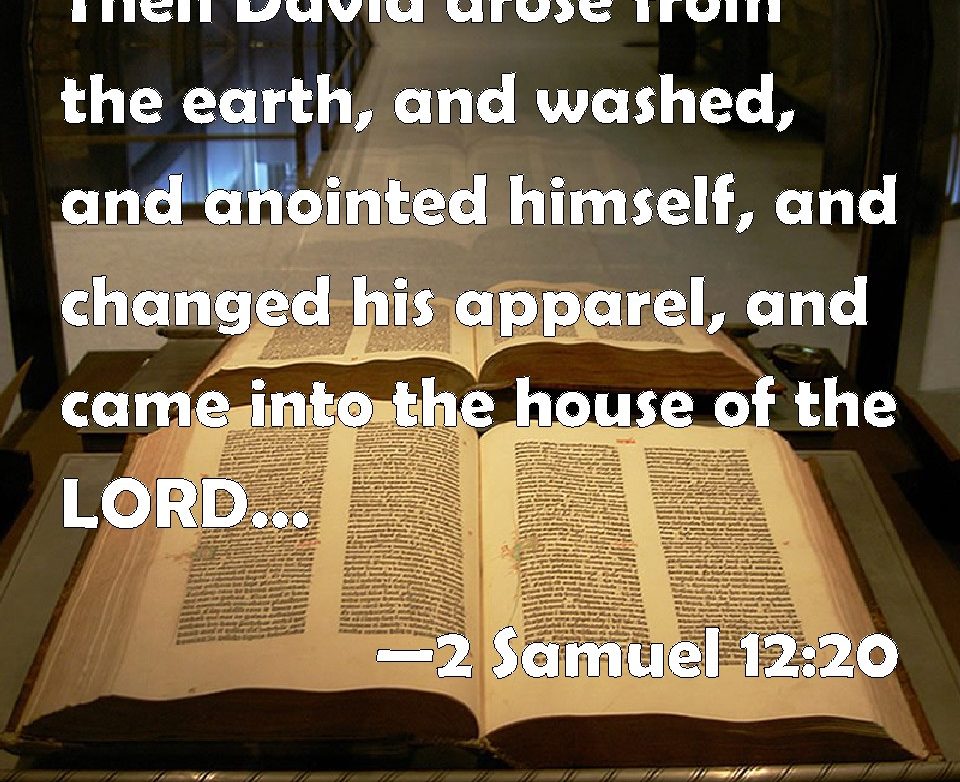 Put on a garment of praise and go to the house of the Lord. Rather than asking God to bless things that are connected to a wilderness experience in your life.

Move Out and Move On

I want to revisit an ancient story about the great king of Israel, David. His life is a montage of great military victories and painful personal defeat. He was the man after God’s own heart, the sweet singer of Israel, and the leader of God’s people.

David had been anointed with the oil of presence and power. He was gifted by God to battle Israel’s enemies, and he used that gift to destroy the Philistines. He had left the headless corpse of a Goliath in the Elah valley when just a teenager, a little boy carrying a big head. He celebrated great victories, yet he also endured some great failures, brought on by his uncontrollable desire for lustful passion and a quick temperament.

Strength of character and moral purity were troublesome areas in David’s walk with God. At times his pursuit of God is so moving as we hear those melodious psalms of praise and genuine heartfelt worship. At other times we want to ask David, “What were you thinking?”

In time, the man carrying the big head was made to realize that the big head was no longer the head of an enemy but his own. The enemy within him created a disastrous circumstance that brought the great king from the throne of power to a pitiful worm lying upon the ground in misery, shame and remorse.

NATHAN’S WORD FROM THE LORD

Sin will always cost you more than you want to pay. Those wages of sin strike home when the penalty of death is realized. That somber prophet stood in the throne room of the king and announced his fate, “Thou art the man!” David was told that the child would not live, and that news drove him to his knees; and he began to fast and pray for the Lord to reverse the curse, and allow the child to live. David, the great king was devastated, and completely stripped of all ability to cope with the fact that he not only was an adulterous thief, but also a murderer. Sin will always take you farther than you want to go!

The scriptures inform us that David knows about God’s mercy, and His gracious loving kindness, for he has experienced it before. His life has been blessed with grace and mercy, mainly because he repented so well! But this time, mercy, and loving kindness won’t come, and day after day the child grows worse, and David continues to lay on the ground in misery and shame. You see, sin will always keep you longer than you want to stay!

David, the giant killer, the warrior king, now lies motionless on the floor with all of his followers looking on. Joab knows about it; the mighty men know about it; the people on the street and in the homes know about it. The sin that was committed in secret has now become public, and the heady, prideful leader is now so mesmerized by the circumstances surrounding his sinful actions render him paralyzed, miserable, and emotionally destroyed.

There are many instances of people praying for babies in the Bibles. But David is the only man who prays for a nameless baby.

In 2 Samuel 12:18, David prays day after day for seven days! He is trying his best to beseech God to change His mind and let the child live.

Some of you have birthed some thoughts and plans that you are trying your best to keep alive, and you’ve become so weary, and frustrated because you can’t make it happen, and you won’t let God terminate that attitude, and kill that plan, and bury those thoughts that are causing you so much pain and heartache. My advice is to kill what needs to be killed. Let him take out of your life those things that were conceived during a time of sin and spiritual rebellion. Stop asking God to bless things, and keep things alive that are connected to a wilderness experience in your life.

Could I submit to you that leadership and anointing is always accompanied with difficulty and struggles that will knock you to your knees; that along with the positive, and productive things in your ministry and family, there will also be devastating blows that will threaten you spiritually, mentally, physically, and emotionally. It’s a fact, all great men and women who have done extraordinary things for God and the Kingdom have suffered through some mess, and slugged it out with adversaries and enemies of the faith, mission, and vision. Sometimes a leader will wonder if the present difficulty is the one that will knock you out!

It might be that at those times, we may be trying to keep something that God is trying to take!

B. Jesus prayed “Nevertheless(Not what I want to hold on to) Thy Will Be Done!”

At other times we want God to take what He wants to leave.

Give David a Goliath, I Will kill him.
Give me and enemy and I will crush him
Give me a problem and I will solve it.
But the greatest enemy is not out there, its inside me!

Could it be that David saw in this child something that reminded him of himself.

We hear him say, I was born in sin and in sin did my mother conceive me. When Samuel came to anoint a king, Jesse did not include David in the list of his sons! Could it be that David identified with that child so intensely because he saw himself? It’s human nature for us to empathize with someone whose plight resembles our own. His empathy was so great that nothing and nobody could make it better.

Sometimes your history will cause you to fiercely fight what is in front of you.

As a man thinks in his heart, so is he. We are changed by the renewing of our mind. Buying new things won’t change the root of the problem. A new car, a new house, a new job won’t make a new marriage! There must be a renewing of the mind! A new dress or outfit won’t make you a new person! There is no button to push or glass slipper to find, or yellow brick road that will help things until you change your mind! You must change the way you think about YOU!

They tried everything to raise David up and get him going again. But nothing worked! We can try all the means and ways to help raise somebody. But it just got worse! He could not handle the truth! The truth is what destroyed him. No person nor means would raise him.

On the seventh day, he perceived! He knew in his heart and mind that things had changed. He accepted his reality and got up off the ground, washed and groomed himself, and began to eat. It was time to move on! No matter what everyone was saying, David got going again. He was transformed! No longer a victim! No longer a miserable wretch wallowing on the ground, but now he goes to the temple and worships! Like Isaiah, he got up off that ground and here am I Lord send me, restore the joy of thy salvation, I will lift up mine eyes unto the hills from which cometh my help, my help comes from the Lord.

Today is a day of getting up for you! Today is the day when you are going to be renewed in your mind. It’s time to move out and move on. Change your garments! Throw off those rags of despondency and desperation. Put on the garment of praise and begin anew!