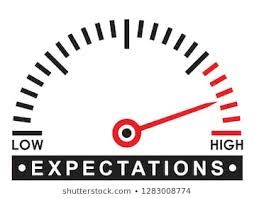 I enjoy watching people during church services. You can see a lot in the faces of the congregation as you stand in front of them. There are people who seem to be on the edge of their seats waiting to hear every word you speak, and there are people who sit back like they have heard this many times before and nothing really changed in my life. The difference between these two groups of people is their expectations. The Alabama coach has opened a car dealership in Irondale and their motto is “Expect Excellence.” They want you to come expecting to be treated with excellence. My devotional verse today talks about expectations. (Matthew 8:13 And Jesus said to the centurion, Go they way; as thou hast believed, so be it done unto thee. And the servant was healed in that hour.) The Roman soldier had a servant that was sick. He did not ask Jesus to come to where the servant was, but to just speak the words and his servant would be healed. Jesus responded according to the soldiers expectations. I can’t emphasize enough the importance of a positive life. Positive living produces positive results and negative living produces negative results. We spend way too much time speaking about what we are facing and not nearly enough time speaking to what we are facing. Speak life into your situation today. Expect God to do something in your favor. As the ball coach says, Expect Excellence!! You will not be disappointed. Pastor Don [image: image.png]